Is your massage a placebo? (Part 2)

Some note worthy links:
Seven alternatives to evidence-based medicine (this is satire, folks)
I highly recommend the "Why Science?" series here.


In the first part of this blog, I explained the origin of, and the need to understand, the placebo in medicine.  I left off with this question: how does one know if massage is a placebo or a valid physical treatment?

Before the inclusion of the Scientific Method, it is safe to assume that tradition was the foundation of clinical reasoning.  The handing down of wisdom from master to student was the best paradigm we had. Much of that wisdom was based in faulty models of how disease, health, and the human body function.  This tradition leads to very poor critical thinking, it even has its own recognized logical fallacy: The Appeal to Tradition.

Finding this appeal doesn't require much work when discussing any form of massage or manual therapy.  Modalities almost universally originate from one charismatic master, and are then carried onward by his/her followers with little room for questioning.  This origin story usually has a sequel when the best students of that master become "apologists" for their respective school and begin to make subtle changes to keep the method alive.  Here is one example of many: Chiropractic Medicine

Massage is deeply rooted in this old paradigm, it is a part of nearly every cultural tradition.  In arguing with other massage therapists (something I often find myself doing) one of the first statements they will make is, "Massage has been around for thousands of years."  This is meant as a blanket defense against all criticism; a tactic used to defend many forms of alternative medicine.  It is meant to demand respect without giving an answer to any of the difficult questions.

That line of thought is helpful in one very substantial way, if other CAM therapies use that same appeal they could be used in designing tests for massage.  In fact, acupuncture is often tested right along-side massage. The results are fascinating for these studies, mostly because they often conflict and show a wide variety of results.  The highest level of evidence you can find on acupuncture indicates that is sometimes works better than a "sham" treatment, and even that is contended for good reasons.  Poking people with needles (sometimes with heat or vibration or electricity added) is a very large sensation, which will effect how the brain reports pain.

It's important to note here that not all placebos are created equally.  As Dr. Harriet Hall put it:


We not only know placebos “work,” we know there is a hierarchy of effectiveness:


Here is the rest of that very enlightening article.

You'll notice that spending time engaging one on one with a person while physically applying pressure isn't on that list.  Again, how does one fake interpersonal contact?  It has also been shown that patient expectations influence the results.

Massage research is very poorly executed, and very poorly standardized.  Researchers have to define what they mean by "massage" before engaging in a study.  The method of precise measurement of time, amount of pressure, style, direction of force, purposed model, and practitioner expertise must be worked out before the trial even begins.  That is why so many reviews are inconclusive:

"No recommendations for practice can be made at this time because the effectiveness of massage for neck pain remains uncertain."

"It is concluded that too few trials of massage therapy exist for a reliable evaluation of its efficacy."

Is your massage a placebo? (Part 1) 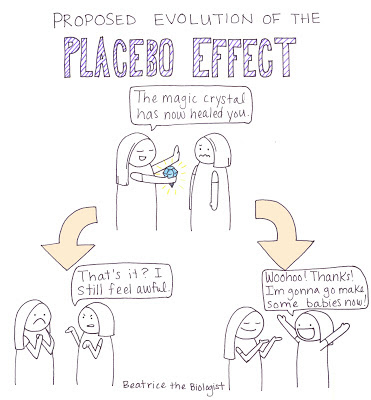 http://www.beatricebiologist.com/2013/03/evolution-of-placebo-effect.html
Since day one of being a massage therapist, the single most interesting and wide-spread concept I've run into is the Placebo Effect. When it comes to treating any kind of condition, the idea that my hard work could be irrelevant to the results can be both frustrating and intimidating. Everyone I work with knows of the placebo effect, but few understand it thoroughly, or how it applies to massage.

Lifted from Wikipedia "The word placebo itself originated from the Latin for I shall please.[1] It is in Latin text in the Bible (Psalm 116:9, Vulgate version by Jerome, “Placebo Domino in regione vivorum”, “I shall please the Lord in the land of the living”). Jerome translated as "I will please" (placebo), the Hebrew word "ethalech", "I will walk with" as in "I will be in step with". This word gave its name, placebo, to the Office of the Dead church service. From that, a singer of placebo became associated with someone who falsely claimed a connection to the deceased to get a share of the funeral meal, and hence a flatterer, and so a deceptive act to please.[2]"

Voltaire famously said "The art of medicine consists in amusing the patient while nature cures the disease." and in Voltaire's time (1694-1778), this was very true. Medicine was still mired deeply in Vitalism, The Four Humors, and Folk Medicine. During Voltaire's century people were often killed by their physician with "medicines" that proved poisonous, botched/unnecessary surgeries, and the practice of bloodletting. It is fair to say that science and medicine have evolved since then; but how has it evolved and by what method?

A first step was the introduction of techniques to control against the many confounding factors that obscure results. Every "expert" is a flawed observer; placebo effect, confirmation bias, regression to the mean, belief bias, attentional bias, and a whole host of logical fallacies distort perception. Regardless of education or experience, humans will make observational errors that undermine their search for effective treatments. The more time and money one has spent on a particular area of study, the more likely one is to fall victim to ignoring information which disputes that area. Which is why the opinions of experts are at the bottom of the Evidence Pyramid:

In the book Trick or Treatment: The Undeniable Facts about Alternative Medicine by Edzard Ernst and Simon Singh, we start with the story of Dr. James Lind (1716-1794) who first identified oranges and lemons as a treatment for scurvy, a disease that effected the outcome of many wars by wasting away and killing millions of sailors. Lind designed the first recorded group study to compare six contemporary treatments (Cider, Sulphuric Acid, Vinegar, Sea Water, Medicinal Paste, *consisting of garlic, mustard, radish root, and gun myrrh and citrus fruit) on sailors with scurvy. It's important to note that the fruit was considered "alternative medicine" at the time and was only included by chance. The medical experts of the day would have likely prescribed bloodletting two or three times over before entertaining nutrition as a mode of treatment.

As my readers may well know, scurvy is a deficiency of vitamin C, those given cider got a little better and those given lemons and oranges got significantly better. A key point here is the five other treatments had previously shown promise when tested by themselves. The proponents of these treatments, and of bloodletting, weren't dishonest intentionally; they had fallen victim to the Placebo Effect. Placebos will look dramatic in isolation, but once you line them up in a trial against an effective treatment, their effect seems irrelevant.

This method of taking what experts think, then applying a simple test to weed out bad ideas, is the basis of the scientific method. To further illustrate the point about expert opinion, Dr. Lind didn't even understand what he had done, and waited years to report his findings. He even tried to create and sell a lemon juice concentrate (processed in a way that destroyed its vitamin C content) damaging his own credibility with its ineffectiveness.

So how does all this apply to the type of massage I do? It's not like I am curing diseases. Most trained massage therapists know better than to diagnose or claim to treat any physical condition. We should be "complementary" and not "alternative" when we do our jobs correctly. I work within the spectrum of science-based medicine, not in contrast to it. It is very important to make that distinction. I have, and will always refer patients to physicians when I see something outside of my scope of practice.

That said, when I see any patient, I must address their expectations. One who seeks massage therapy for a specific ailment (e.g. headache, neck or back pain, anxiety, depression) usually desire a specific result. How do I get that result? How do I support the claim that I can have any result at all? I know what they want, I know many different ways to approach that goal, but how do I know which to choose? In any decent massage school, we are taught muscle names, origins, and insertions. We are taught (though many forget) the finer details of anatomy and even a decent amount of pathology and kineseology. *We also get a substantial dose of non-sense... but more on that later.* We can't necessarily take this hard science of what is in the body and gain insight into what ought to work. The classic Hume Is-Ought Problem comes to mind.

To further complicate matters, hundred of "experts" over hundreds of years have claimed to have the magic bullet for pain, and have produced an equal number of modalities to capitalize on their personal panacea. Regardless of the fact that a placebo effect could explain most of their results, very little has been done to substantiate the claims of the many gurus in the field of massage and manual therapy. There are books, videos, articles, trade magazines, web pages, seminars, and even entire physical schools dedicated to teaching the "One True Cure" with thousands of methods. Some are unique, most borrow heavily from each other, and many differ in name only.

Massage has no recognized peer-review system. Often times, massage studies are done with no control group at all. If there is a control group (one receiving no treatment) how do we know the massage technique isn't a placebo? There is no established fake treatment that one can give as a placebo to measure massage against. It is almost guaranteed that anything that one person does with the intention to affect another person is a school of massage. For example, touching isn't required, neither is being in the same room. Some are actually quite specific. Other tell us that we all can heal ourselves.

So what could I do to prove any particular method is more effective than a "sham" treatment?

Is your massage a placebo? (Part 2)